There’s nothing better than the love that lasts a lifetime between a husband and a wife. James and Lauretta Burke are two people who were lucky enough to experience this kind of love during their marriage, which lasted for 64 years.

James and Lauretta met in 1945 after James got home from fighting in World War II. They two were introduced by a neighbor, and they immediately fell in love. James was ready to marry Lauretta immediately, but she insisted on finishing college before walking down the aisle.

Lauretta graduated from Mount Mary College in Milwaukee on a Tuesday, and she was married to James the very next Saturday! The couple moved to Akron, Ohio and had nine children together, five girls and four boys. Their granddaughter Colleen Muldoon said that each of their children went on to have happy and healthy relationships, which she credits to the way her grandparents raised them.

“On each of his daughters’ wedding days, [James] would say [to the groom], ‘The greatest thing you can do is to never stop loving your children’s mother,’” Colleen said.

James and Lauretta have 23 grandchildren and five great-grandchildren. Sadly, Lauretta was diagnosed with Alzheimer’s disease a few years ago, and James stepped up to care for her.

“Once she started being forgetful, he’d step up and remember the birthdays and graduations,” Colleen explained. “My grandma was the stubborn one in the beginning, but at the end her mind failed her, which was really hard to see.”

A few years after that, James had to undergo surgery to get a pacemaker placed in his heart, and complications from this had him going in and out of the hospital for months. His family realized that his body could not take much more, but James was determined to live for his wife.

“He was basically living for her,” Colleen said. “They were like the same person after being together for so long, and he didn’t want to give up because he knew that she needed him there.”

James finally accepted that it was his time to go, and in his last moments, he wrote out instructions to ensure that his wife would be cared for in the best way possible. He then gathered his family give them a last message.

“He said he was going home, and that he would see us all again,” Colleen said.

Just before he died, Colleen took a final picture of her grandparents. After Colleen looked at the photo, she was surprised to find that it looked familiar. When she pulled out her grandmother’s wedding photos, she was stunned to see the similarity between one of them and the last picture they ever took together. The two photos show just how powerful James and Lauretta’s love was for each other! 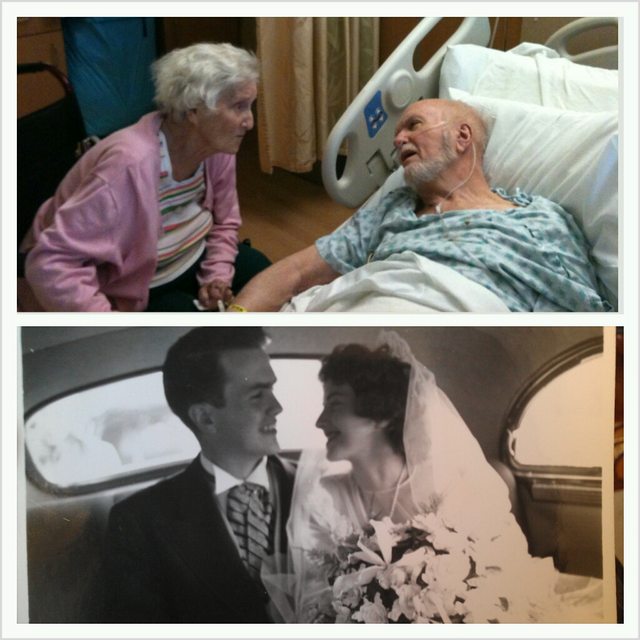 This serves as a beautiful testament to a love that lasted a lifetime!