Every single day, an elderly man went to the cemetery to visit his wife. Or, at least, that’s what everyone thought he was doing. When his son discovered what else was going on, he was shocked.

Roger Reissig of Montgomery, Texas, loves his dad Jake. And, he knows how much his dad misses his mom, who passed away, leaving Jake a widower. Of course, Jake still wishes he could see and talk to his beloved bride, but he can’t. So, he does the next best thing. The elderly man goes to her gravesite twice a day. However, he was doing so much more than just visiting her grave.

Roger thought he knew what his dad was up to. He knew his dad had a routine, but he didn’t know there was more going on than he realized. However, it became obvious when he visited the cemetery himself. With one look around, he quickly learned what else had been happening. Roger saw that Jake had definitely been up to something. And, that’s when Roger started snapping some photos.

“It’s been over a year now since Mom left us to go to her Heavenly home,” Roger wrote in a Facebook post, letting the world know what his father had done. “Dad goes out to the grave to visit her twice a day. He has a routine where he clips some roses from his rose garden at home and delivers them to Mom. Then, he hooks up a hose and waters her grass twice daily,” he explained, detailing his father’s amazing act of love toward his beloved wife.

The results of Jake’s efforts were clear. His wife’s gravesite was one of the only ones getting watered, so it stood out from the rest. Lush and green, it was “very beautiful,” Roger said. But, more had happened at the cemetery than the usual routine. In fact, someone had caught his dad’s attention one day, and it would change the course of the elderly man’s regular visits. 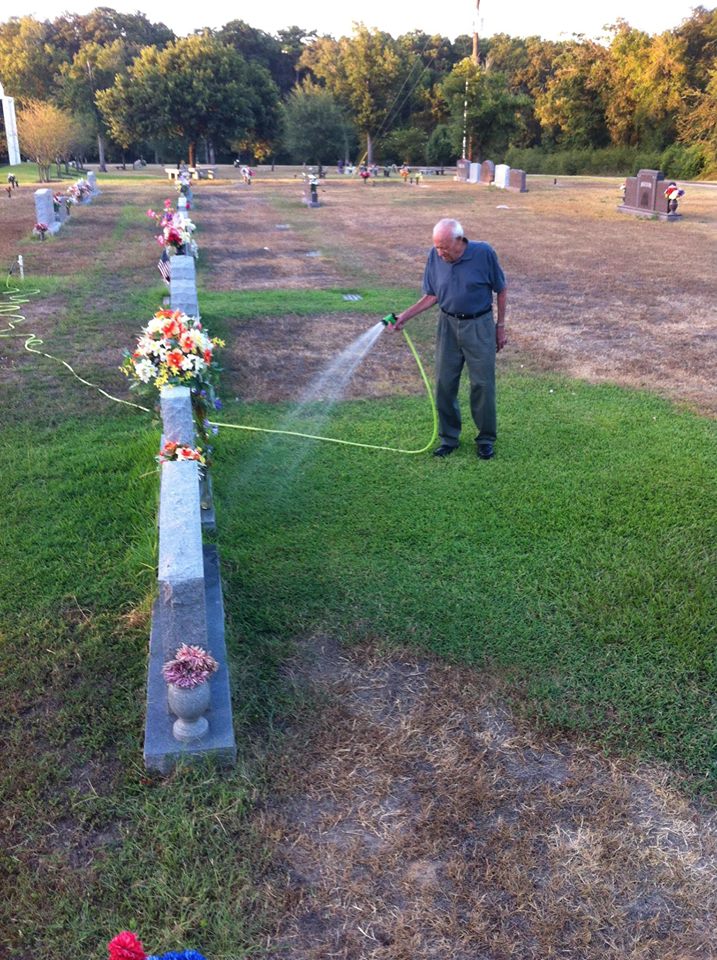 “One day while watering he saw a young lady down from him kneeling at a grave and crying uncontrollably,” Roger recalled. “Dad went down and talked with her and found that her husband had been an SSGT in the US Air Force and lost him in 2010. After they talked and shared stories, she thanked him and left,” Roger added. However, things were far from over for Jake.

“Dad decided to Honor this soldier and start watering his grass along with Moms daily,” Roger explained, revealing the selfless thing his elderly father was doing to show his thanks to a fallen soldier for his sacrifice. His dad was faithful in his duty. “He does it every day. He said it is the least he can do for him after all that he sacrificed for us. You can see his green grass in the pictures down from Moms,” he pointed out, including many photos along with his post. 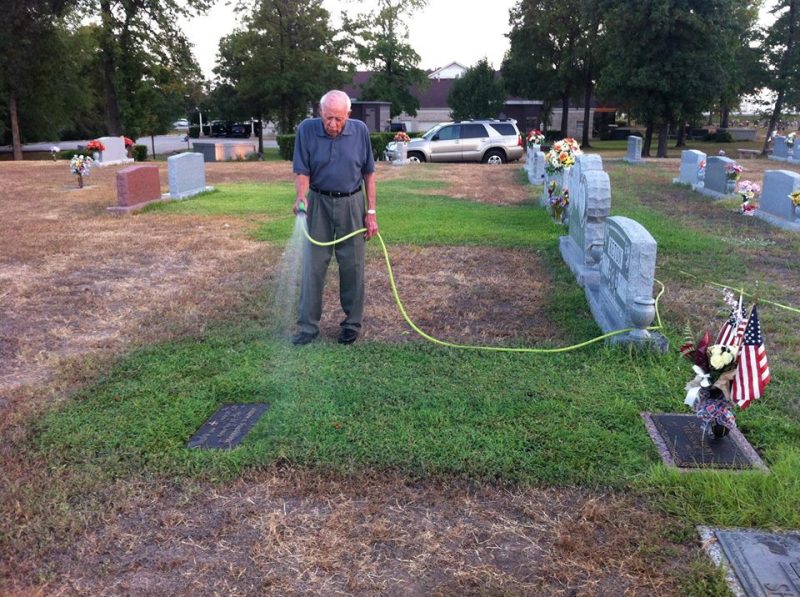 “Very thankful for this young Man’s service and very proud of my Dad and what he does to Honor him,” Roger declared, before concluding, “Love you, Dad!” Unsurprisingly, Roger Reissig’s post almost immediately began to go viral as social media users applauded his father’s kindness and selfless heart.

“Roger, your Father is an inspiration to all. Thank you for this lovely, heartwarming story of true love and dedication,” one woman wrote, while another added, “We need to hear more stories like this.” How right they both are. We could all learn a lot from Roger’s dad about love, honor, selflessness, respect, and service. These are the stories we need to see and hear to remind us what kind of person each of us should inspire to be. This world could use more people like Jake, there’s no doubt about that. The grass isn’t the only thing made beautiful by his selfless gesture. He also restored a lot of faith in humanity.